Why change up a light switch?

Light switch is probably something you interact with at least a few times per room per day. If you have an old looking light switch, sometimes it is not only hard to use but also becomes an eyesore that you’ll see multiple times a day.

This photo below is the light switch “before”. It was in an old almond color, and I painted it over with the same color as wall. It helps with reduce the prominence but still doesn’t look great. Plus because of the painted surface, it is not super durable and I have small chips on the switch here and there.

So why not modernize your light switches at home with something that sparks joy? We recently changed our light switch and cover in our home office and just couldn’t be happier! It elevates the space by giving me a great impression because it is located right at the entrance! And every time I turn on and off the light, it makes me happy 😀

I made a quick 2-min video on how to change the light switch and cover. For some parts of the DIY process, it might be easier to understand by watching the video. So give it a watch and then read the step by step instructions for details on updating light switches.

For this project, you’ll need a new light switch and a matching switch cover plate.

I’m obsessed with a vintage inspired single push button switch so I’m going with that and a matching switchplate. I got both from Rejuvenation and here are the exact ones I got:

How to change light switch and cover step by step instructions

Once the power is off, use a screwdriver to remove those two screws which were holding the plate to the wall.

Once we remove the cover plate, you will be able to replace light switches

To remove the old light switch, first remove the two screws that are holding the switch to the wall. Then you can pull the switch out a bit in order to disconnect it from electrical wires.

At this point, you’ll be able to see what terminal screws are holding what wires. I recommend you to take a picture of the current situation so that you can refer later when you install the new switch.

Now you can loosen all the terminal screws until you are able unhook the electrical wires easily. After unhooking all the wires, you can remove the old switch successfully.

So The idea is to reconnect the same electrical wire to the new terminal screw on the new switch. I’m using a single pole switch with push buttons because I love the analog look. If you are using a three way light switch, there are also 3-way push button switches for modernizing your light switch.

But here’s one tricky thing: our house is super old (built in 1940s), so we don’t have the ground wire for this light. And because of that, we skipped the ground terminal screw (green color). If you have ground wire, you should definitely connect that one as well!

So for us,we hooked the electrical wire to the corresponding screws. You should be able to find which wire connects to what based on the picture you took, or the instruction manual that comes with the new switch. Worst case scenario, a simple google search will also give you a diagram on what terminal wire is supposed to connect to what.

So now just hook up each electrical wire to the corresponding terminal screw, then turn the screws to tighten it so they are holding the electrical wire (metal part) tightly.

Then you can push the new switch back into the wall opening and use the screw it came with to secure them so that they are flush to the wall.

The last step is to pop on the new switch plate and add two screws to hold plate cover to the wall! And you are done! Turn back and power and test out to see if the new light switch is working.

So that is all the steps to change old light switch to a new one. This is such a simple project, but I absolutely enjoy turning on and off my light a lot more than before! It’s definitely a place that sparks joy for me!

And speaking of what light switch to update to, I personally love a single push button switch. It is always fun to push in and out, and the vintage style is just classic!

Pin it for later

If you enjoy this post, get email updates (it’s free).

Nice to meet you! 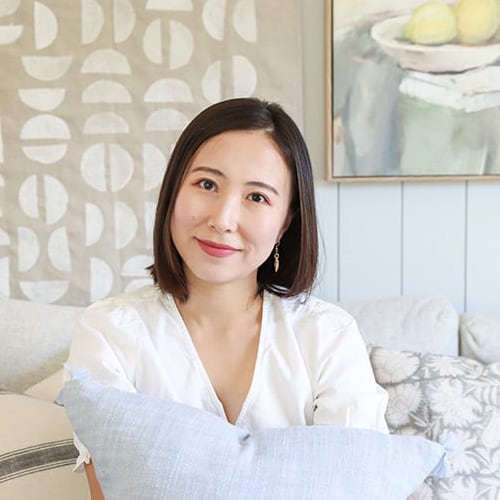 Hi there, I’m Kelin. I like making home personalized and pretty using a DIY approach and share everything I’ve learned along the way over this blog. Read more about me here.

Stay up to date

Want to be the first to know what I'm working on?

Hello, I'm Kelin. I make home personalized and beautiful with a DIY approach and share everything I’ve learned along the way. Read More…